I used to hate running – I went to a small ex-pat school in Athens and to get into the football squad, you HAD to run cross-country. After a season or two, I began to enjoy it, but then wine, women and song took over and my sporting prowess (at both running and football) came to an end. I got back into fitness eight years ago after the death of my dad, and did a running challenge where from scratch I ran three miles a day, every day for a year and blogged about it (1095miles.com). The three miles got longer and longer through the year, and I eventually did two halves and a marathon as well.

A year later, along with three pals, we wanted to do something different. Jamie Holmes (who is also on the Spartathlon team) has a lovely daughter Holly who suffers from a condition called hemiplegia and we want to raise some cash for a charity called Hemihelp that gave the family some assistance. We decided to run the Brighton and London marathons a week apart – and run from Brighton to London in the middle of the week between the two. The middle run was self-organised, relatively shambolic, great fun and an amazing experience – a bit like most other ultras I’ve completed. Other runners came and joined us for little bits of the run. It’s when I first really ‘got’ the idea of ultra-running. Sadly, our other two running pals from the ‘dream team’ that completed that challenge (and every one we’ve done since) David Bone and Darren Strachan are on the waiting list. I never want to wish ill on any other runner, but I would love it if by some quirk, they could join us in September.

I’m an ever present at the Brighton Marathon – the first one I completed – and the Leeds Half which is my hometown race and one I always fit it into my training diary. I also used to love the London Ultra but that’s now gone. As a foursome, we tend to do one real biggie a year – but not always an organised run, so mostly, you’ll see me pounding roads and dirt tracks around Otley on the cusp of the Yorkshire Dales where I live.

Most memorable was the four of us crossing the finish line together in joint first place at last year’s 24 Ultra Trail run at Ashburnham, near Hastings (http://www.24ultrarun.co.uk/)

I was so buoyed by my first that first place (above) that the following Sunday I decided I was invincible and tried to follow a up with a PB attempt at the Yorkshire Marathon. I flew the first half and was on course for a 3.10 when I felt a twinge. By mile 15, I was limping and dragged myself around the course to come in just under four hours and in total agony. Along the way, people were trying to gee me up: “come on, you can do it” – I wanted to scream “I ran bloody 113 miles a week ago, I know I can do it.” The resultant stress fracture left me sidelined for two months – the most frustrating thing ever. At times, I still hate running, but when it’s not there, I don’t half miss it.

What events do you have planned for 2015 up to Spartathlon?

None! I’m plodding my way around with a couple of long ones self-organised with Jamie.

I try to mix things up and do lots of cross training. I teach an Insanity Live! exercise class twice a week, swim and have a garage gym. I then try and do 4 shortish runs through the week, increasing my two/three weekend biggies with Friday and Saturday‘s runs being a little shorter.

If you’ve trained well, you can do it… even when that nagging voice is saying you can’t, you can.

Muhammad Ali threw a couple of punches at me. I met him at the launch of a PlayStation boxing game along with Lennox Lewis (who I was interviewing). When I got to talk to him, he took up a stance and chucked a couple of air punches my way. Even though he was clearly blighted by Parkinson’s, he lit up the room. A giant of a man. 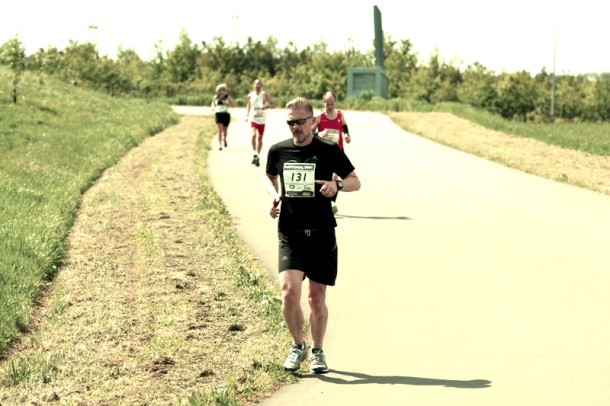 Kissing the feet. Some good banter on the way. I was also raised in Greece and speak Greek fluently, so it’s kind of a homecoming for me. I don’t want to let anyone down.

The bit after the Acropolis Athens, until we hit Cornith.

Hoping to bring the long-suffering missus, Laura, who keeps our four-year-old twins Martha and Gracie occupied while dad’s training. What more does she want than a weekend away to watch me running for 36 hours? Can I give a girl a good time, or what?