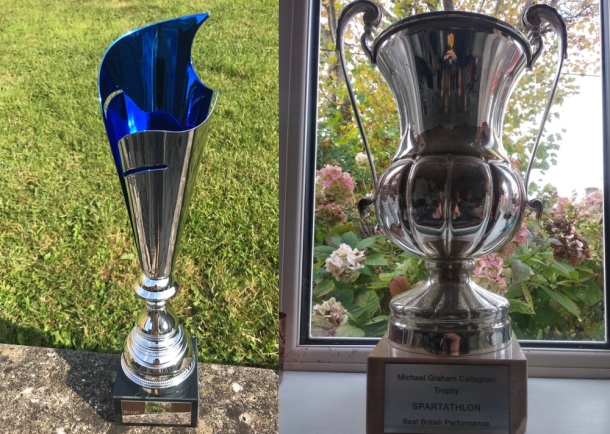 The ‘Michael Graham Callaghan Trophy’ was donated by Patrick Macke who was originally awarded this for his 1985 Spartathlon win.Patrick’s wish is that we rename the trophy the ‘Michael Graham Callaghan Trophy’ after the original Spartathlon organiser Michael Graham Callaghan who unfortunately passed away in 2013 and award it as a perpetual trophy for the best British Performance at Spartathlon each year. I’m sure you’ll agree this is a very kind gesture by Patrick which will be greatly appreciated by all future British Spartathlon runners.The trophy was held by custodians Malcolm and Marilyn Campbell (Malcolm was in fact a world beater himself on the Ultra scene and inaugural President of the IAU) before this was donated to the British Spartathlon Team.
Michael CallaghanMichael Callaghan was a member of the British Hellenic Chamber of Commerce in Greece. When John Foden approached the British Chamber in Athens with his theories. Michael was one of the few who took this project seriously and started to gather sponsoring for John Fodens’ trial run and for the first official race which resulted in what we now all know as Spartathlon.

Without Michael’s efforts Spartathlon might never have come about and John Foden’s ideas may have been forgotten.

Unfortunately, the original 1st British Female Finisher trophy was mislaid and a replacement trophy purchased in 2019. After a vote on the British Spartathlon Facebook page, it was agreed to name the award the Lizzie Hawker Trophy after her fantastic 2012 Spartathlon performance as 1st place female and 3rd place overall. The team aims not to lose the trophy again a second time!

With no female runners in this years BST Team we had 25 British men all challenging for the Michael Callaghan trophy. In the early stages of the race Alistair Higgins was once again leading from the front and on the charge for a hat-trick of wins with Danny Hawkins and David Bone close behind. With some unkind stomach issues both Danny and David over-took Al around the mountain stage and Danny kicked on to a huge win and 15th best British time ever.