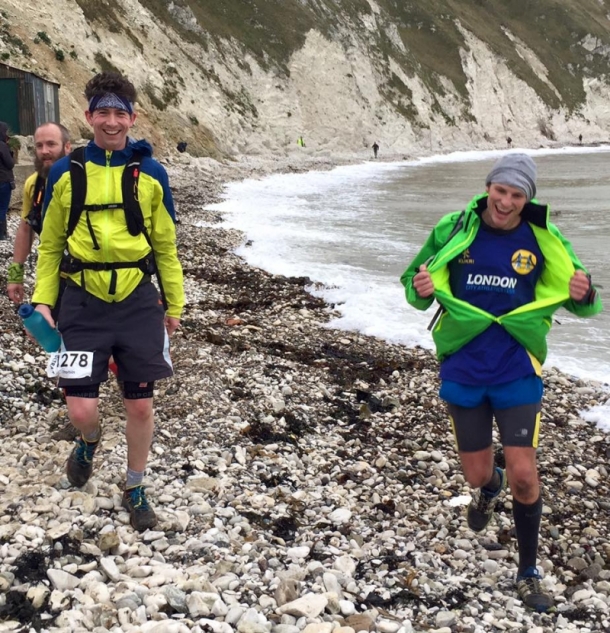 A lot of football growing up specced the engine so to speak, followed by a few casual half marathons at University. A group of mates and I went through a coming of age training journey to compete in the 2014 Tenby Ironman, which I loved, but decided I preferred the 3 sports in their purer, traditional (and less visorey) forms. Bits and bobs of light coaching and runleading over the past few years, mainly through membership of London City Athletics Club and now Chorlton Runners, has ensured running is by far and a way leading the three in terms of priorities! An all-round enjoyment of endurance, exploring limitations and mentality, as well as a bit of a biomechanical quest to employ as close to traditional good form over longer distances as possible – whilst not accusable of plodding, this comes with its own risks!

First A race was Race to the stones in 2015 (already with Sparta qual in mind), but ultra outright was the first edition of the Bingo run earlier that year in Bedford. I’m too disorganized with stats and charging watches etc to have been a platinum member of the pace/wattage academy, so was drawn to something a bit purer that was actually simpler and more human in approach, as well as in line with our evolution – something I studied at degree level. Sport-wise, ive always had a gritty-if-less-talented type of self identity when it comes to competition, so knew this would be my calling. That extra time and freedom from intensity is perfect to get moment-present and pretentious in beautiful natural surroundings, so throw in some shameless empty calorific aid stations, pseudo science and a fascinating relationship with pain thresholds (I am a bit of an over-thinker and like to be a reader/student of the pursuits I follow) and it was a done deal – ultras are the thinking athletes crumpet after all.

Trailblaster 24hr on 13-14th July should be my longest formal distance ahead of sparta (and stab at a club record). I have a high intensity block of back-to-back marathon to 50mile(ish) runs in late may, starting with a friends 2nd Manchester Heart Run charity run to commemorate the Manchester bombings (22/05), Track Mara (sat) and 6hr track (sun) at Leigh on the weekend of 25/05, and a trail marathon on 02/06 in Portugal near Lisbon. April and June will be about frugally run-commuting to 2x “all-u-can-stretch “hot bikram introductory offers as heat acclimatization training (20 and 30 days), with lots of non-race asphalt running in the peaks throughout the summer. All welcome to join if up in the area… I will likely do a few 5k race leagues too, just to stay nice and “toesy” amongst the slower work.

Sparta qualifier at Canalathon 100k 2018, having missed out by 1 minute 2 years before with a late surge and hefty neg split!

20 minutes off qualifying for Kona at Ironman Wales – being 30 minutes behind after the swim didn’t help… but still an achievement.

Setting the record for fastest ever up a forested mountain whilst volunteering in the Ecuadorian cloud forest – wearing molded wellies. All predictably unnoficial!

Walking for 12+ hours through torrential rain and through the night (without injury), with a mate who’d picked up a bad back during t184, to ultimately both pull out. This was clearly against my race strategy and planning, and was death by 1,000 cuts in removing momentum and self-determination from my efforts. Fatigue in all the wrong places (including morale) wasn’t recoverable, but such is the life of an ultrarunner sometimes.

Realising my watch was set to pause time when stopped, revealing I was significantly behind pace at halfway of a 100k. The neg split nearly killed me, alongside the anxiety of not knowing the actual time, missing the 10hr Sparta qual by a minute.

What events do you have planned for 2019 up to Spartathlon?

Very middle-of-programme heavy, with unofficial efforts early and later on towards Spartathlon:

IN SHORT… don’t rely on neg splitting, or pushing pace later – it may not be there, so try to tap out at least your sustainable target race pace while you can. Distance that conscious brain from the body and the chimp, as they’re idiots… Training focus on form and strength rather than huge mileages, although clearly experience of going big and digging in is king in ultras… try to stay present in your form, leaving the breaks off by running and contacting the road fluidly

IN LONGER… Drip-feed protein/recovery powder into the rolling diet from an early stage (camelback) to compliment water/electrolyte and isotonic flasks. Eat before hunger, drink before thirst – better to carry the weight in-belly than in bag. Concentrate on form and keep the cadence high – “on top of your gear” as cycling would have it – identify plodding and try to work away from it, as itll only end in mashed joints, diminishing speeds and smashed psychology. Consolidate the early growing pains of running (up to 6/10 intensity) into a liveable 3/10 of background bodily white noise – that’ll have you placed much better, happier and fresh to deal with the real stuff when it arrives.

Lots of social stuff, so a pacey club run and parkrun, with a more reflective couple of lone long runs with music/podcasts etc. A track session – yasso or similar – is a great foil to heavy going miles – which I try to fit in with my club at least 1 of the 2 offered by club per week. Ill have one day focusing on cross training and active recovery, so likely swimming a k or two and some gym stuff. And a day of shorter runs, but 2 or 3x, just to get the mileage up in a recoverable manner. I WFH most days, so there is flexibility to do the latter around desk based stuff and looking after the 6month old. Also a long commute will often have me pass the peak district, so alarm clock pending, a great opportunity for some pretty dawn miles…

Embrace the idea of an emotional and pain rollercoaster, and if possible, leave notions of maintaining a race pace or hitting a strict time at home. Its just too stressful and a waste of mental energy to be wired in all race, and also hard to achieve with no prior understanding of the complex emotional swings involved. So enjoy, be present and chat/appreciate your way through ultras 1 and 2 (and then think about nailing that Sparta qually in #3…)

I once, drunk, took up a mates place in an Olympic distance triathlon the next day. I vomited during the swim, punctured and ran the bike leg through the streets of London barefoot, and thoroughly enjoyed getting my shoes on for the final 10k! not recommended, but a good memory.

Feeding off my crewing mates energy in the dead of night – with whom I shared the Sparta dream from a young age. Placing the wreath on my sons oblivious little head, and bagging a photo for explaining in 10 years time…

The longing for the passing of miles, when all they are doing is lengthening – with a backdrop of negative thoughts of “long term injury” or “just DNFfing further down the road at a less accessible point”. Also hoping the internal diva doesn’t come out to bite loved ones at tough times, however hope they’ll know that’s Pan talking, and not me… Also trying to impart to family that a vomit, stagger, blister or blood doesn’t mean I should quit and seek medical attention – this is Sparta, after all…

Heat (10mile>hot bikram>10mile, as well as running abroad), many back to back sessions, hard asphalt gradual climbs and wild technical inclines, multiple fast marathons to deal with cutoffs and form maintenance, dull sessions along A roads and on track to hone that internal dialogue away from “Hollywood” running to the utterly ground out… and some drawn out pilgrimages through the night back to the parents house on the other side of the peak district. I also have a friend who is an elite sports psychologist, which will definitely help ready me for what will be my longest distance.

Tom Hobbs – best friend from school, and despite not being an ultrarunner, co-fantasiser about what it takes to be a Spartathlete – we discovered the event in awe at the age of 15. An RAF man so well drilled with kit and survival principles, as well as one of Foden’s own, pretty stoic and will be calling me out for weakness and to “get it done” when the excuses start to formulate. Truly great wingman – beg the pun, for whom 153 sounds a small number.

In support will be my Dad, but I’d rather give him a bit of a lie-in and perhaps keep away from familial concern/softenings when the chips are down, as this has once talked me into a premature DNF. The perfect man to share the achievement, however long (hopefully to the tune of 153 miles) with.