Welcome to the first of our regular updates charting the training and progress of British runners who are part of the 2015 British Spartathlon Team.

There has been a huge amount of activity over the past few weeks with the organisation of the British Spartathlon Team.

Firstly, thanks to some sterling work from Rob Pinnington organising the kit and Paul Stout who has raised some sponsorship towards the cost of team kit which will include Runners T-Shirts, Crew T-Shirts, Buffs and ‘Desert’ Hats. The buffs and hats have now been paid for and we are awaiting delivery and we are currently collecting the runners orders for the T-Shirts.

I enclose some photographs of the kit design and should add our thanks and credit to Mark Burnell for the design work. All of this work will mean that the runners are visibly represented as “British Team” at the event. 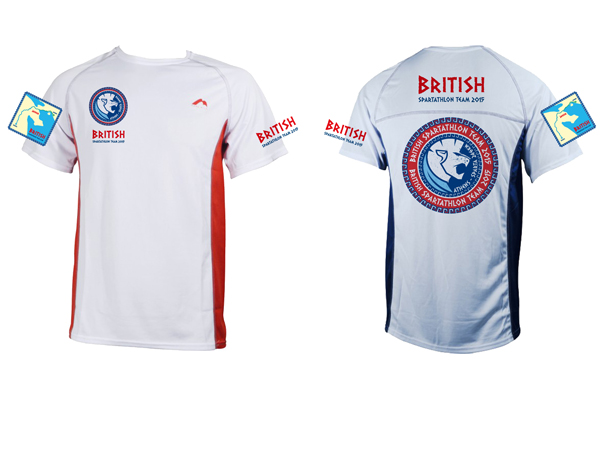 I would also like to use this opportunity to publicly thank out sponsors without whose support we wouldn’t have been able to design and purchase the team kit. Our thanks go to:

Dave Ireland from Birmingham Runner for sponsoring the 2015 Spartathlon Team and supply each of the runners with the official team kit including crew T-Shirts.

Corr Recruitment who kindly made a monetary donation to the team which will be put towards kit and equipment. Thanks to Daniel Corr.

Bee Friends have kindly made a monetary donation to the team which will be put towards kit and equipment. Thanks to Lorna Newson.

Newbury Runners have kindly made a monetary donation to the team which will be put towards kit and equipment.

Thank you to Keith Flood from Floodies for providing the team with some discounted Injinjui Desert hats which will be vital for protection of the runners during the race.

The team also received separate monetary donations from Spartathlete Paul Corderoy who has kindly passed on the ‘cash back’ received from recommending the Transferwise payment scheme for making payments abroad. If you haven’t yet paid your Spartathlon entry fee then you may wish to check out this cost effective way of transferring this money abroad using the link here.

In addition, Rocktape have kindly agreed to provide some kinesiology tape for the team to use during the race.

Spartathlete James Ellis has kindly taken on the role as Press Officer for the team and has been busy putting together a press release and making contact with national and local news agencies in order to spread the word about the British Spartathlon Team.

We will post links and details of any runners or articles featured in the press. Our aims here are to increase the profile of British runners undertaking this race and also to raise some more sponsorship to support the team.

Paul Stout and Sonny Burrows were also featured in their local newspapers (pictures below). 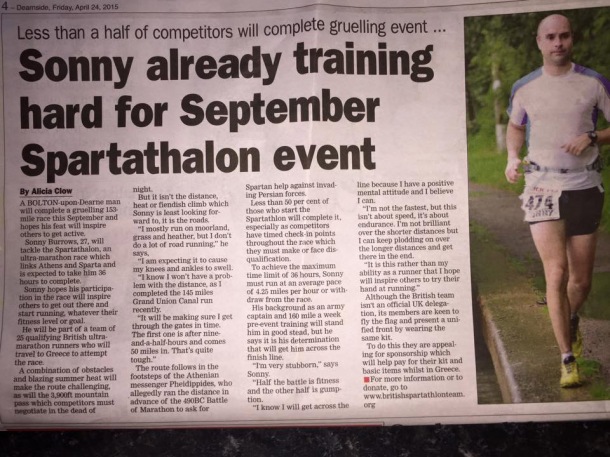 Hopefully, we will see a few more press articles appearing over the next few weeks.

Many of the 2015 Spartathletes have been in race action during April.

The most high profile race was the World 24 Hour Championships (a 24 Hour track based run) which saw Pat Robbins achieve 7th overall and Dan Lawson achieve 24th. Combined with the efforts of other Britsh Runners (including 2013 Spartathlete Robbie Britton who achieved 3rd overall) the Men’s team won the Team Gold which was a brilliant result.

Isobel Wykes (8th position), Debbie Martin-Consani (12th position) and Sharon Law (13th position) were also in action and they successfully earned an Team European Bronze for their efforts as well as achieving high placings individually in the ladies competition.

This was a fantastic achievement for the team who were competing at the highest level of competition and demonstrated that we have some strong UK runners taking part in the Spartathlon this year.

Other athletes were also taking part in races including; John Volanthen who took part in the South Downs Way 50, finishing in (8.56). Paul Stout completed the Compton 40 miler in (6.42) whilst I (Paul Ali) completed The Oner, an 80 odd mile run along the hilly South West Coastal Path. You can find my race report here.

Well done to Ian Thomas who took part in the Bungay Black Dog Marathon where he came 4th out of 175 runners with a time of 3hrs 2mins in his first marathon in over 2 years.

Finally, a ‘huge’ shout out to Sean Maley who is currently midway through his JOGLE (John O’Groats to Lands End run) and is due to complete this on the weekend. Five runners started the event but only Sean Maley is left and is due to finish this 860 mile run this weekend.

Here’a s link to a local press article detailing Sean’s current progress here. Hopefully, Sean will write a few words on this epic achievement when he completes the event and puts his feet up for a few days.

Good luck to anyone who is running in the Virgin London Marathon this week.

I would also like to formally introduce you to the Photography Team who will be following the British Spartathlon Team in September.

Sarah Dryden has kindly offered her services as Team Photographer and she will be supported by Russ Bustley, Richard Tullet & Sandra Hopkins who will be providing valuable support/driving etc. as part of the official photography team, thanks guys your support is much appreciated.

That’s it for moment, we will put together another update in May where potentially 9 of the 2015 British Spartathlon Team members are taking part in the Grand Union Canal Race a 145 mile non-stop footrace from Birmingham to London which will be a good benchmark for people’s fitness and ability to complete Spartathlon a few months later.