Good(ish) at school where I had to run cross country to get into the football team (it was a small school, so it was a kind of bribe to make us run). Then I did bugger all for about 20 years. I’m the proverbial middle aged bloke who re-discovered fitness into his 40s, did a three-mile-a-day challenge every day for a year, then read Ultramarathon Man/Born To Run/Eat and Run (delete as appropriate) and got into ultra running.

When did you start running Ultra marathons and why?

Three pals David Bone, Darren Strachan and Jamie Holmes – all also running Spartathlon this year – convinced me to run the Brighton Marathon one week, the London Marathon the next… and run Brighton to London in the middle of the week. It was self-organised (read badly) but we did the 56 or so miles in about 12 hours, had a laugh on the way and talked about what else we could do. Someone mentioned Spartathlon and we decided to go straight for it. Two years later, I was lining up in Athens for my first tilt (2015).

What are your key personal running achievements to date?

Those who have not yet done it won’t get this until 7pm on September 30, 2017…. There is no greater race in the world than Spartathlon. Finishing two years running is the absolute best thing I’ve done and can only be beaten by doing the triple.

Any really. Like most people, I battle with the demon on one shoulder telling me to stop, that this sport is crazy. Overall though, 2015, my first Spartathlon finish now looks like a complete fluke. I’d done the miles, but had bad shoes, no blister strategy, nutrition went up the spout and I got the most massive blisters after it chucking it down for most of the night. I hobbled in, death marching the last 50 miles, and despite a 35,35 finish, just had to do it again. I felt I’d cheated myself and the race.

What events do you have planned for 2017 up to Spartathlon?

In the two months before I do 5 x 10 miles in the week with a big run, anything from 20-40 at weekends. I also teach Insanity Live, so two to three classes a week and the odd weights session if I can get it in.

Which one tip would you pass onto people running an Ultra marathon for the first time?

Lap up the support of your fellow runners. With the odd exception, it’s an amazing community. 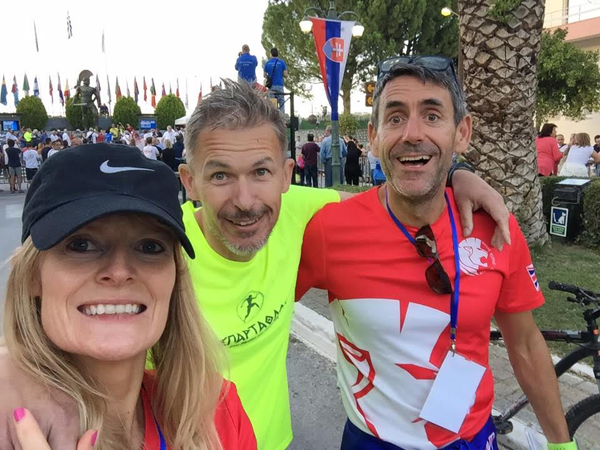 Have you taken part in Spartathlon before?

How did you get on?

What tip would you pass on to those taking part for the first time?

Don’t be scared by the ‘fast’ pace to Corinth. Much of that is run in the morning when it’s a bit cooler so you can gain time there, then slow down for the second marathon. As long as you get to the checkpoint with 30 or so to spare (and I’ve seen it done with less), you can start to pick up time pretty quickly: up to five to 10 minutes per checkpoint if you’re running at even a trot.

Kissing the feet for the third time, hopefully with my three running pals David, Darren and Jamie.

What are you not looking forward to?

There are bits that are a bit grubby but other than that, there’s nothing to grumble about. Arriving in Sparta is the best race finish ever, so I just try and focus on that.

I will have the blonde bombshells with me. My wife Laura and her mate Nicky Robbins.