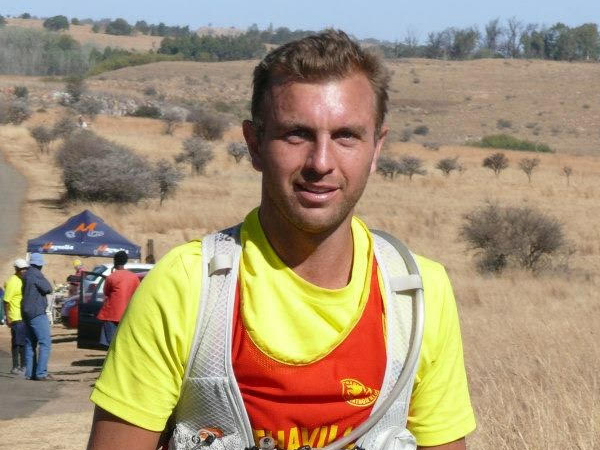 What is your running background? Always been a decent runner from a young age, but only ran my first marathon while living and working in Melbourne in 2006. When I returned to South Africa in 2008 to complete my PGCE I decided to fulfil a childhood dream to run the Comrades Marathon as it was a race I used to watch my father run while I was growing up. I ran the two oceans marathon in Cape Town before running my first comrades in 2008. I have been bitten by the ultra bug ever since, completing 8 successive Comrades runs as well as a number of ultras here in the UK.

When did you first start running Ultra marathons and why? 2008 – Childhood dream to run the Comrades Marathon

When or where (at which events) are we most likely to see you? I try and do at least one of the Centurion Running events each year.

What was your hardest race experience? It would have to be the Golden Reef 100 miler in South Africa. It was run in a game reserve on a a figure of 8 concrete (potholed) track. I was admittedly in bad shape but managed to finish by walking the last 45km with a massively swollen ankle.

What events do you have planned for 2016 up to Spartathlon? Flitch way 100km Spartathlon qualifier (scraped through in 9hrs 49min).
TP 100 miler

What is your typical race strategy for an ultra? I usually tend to try and keep a steady pace going for as long and far as possible before the wheels come off and then I run/walk till I get my second wind.

What does a typical training week look like? Daily runs varying in distance from 10-20km and long run of marathon distance on weekend

What one tip would you pass onto people running an Ultra marathon for the first time? See it as a journey, not a race. Every step is a step closer to your destination. Break the race into more achievable parts rather than focusing on the entire distance which may seem daunting.

I am originally from South Africa and have entered Spartathlon as a South African (so haven’t taken up a British entrants place), but as I live and train in the UK, I will be running in the British team colours. My British wife and daughter (due on 26 June), will hopefully be in Sparta to cheer us to the finish.

Have you taken part in the Spartathlon before? Yes, in 2014

How did you get on? Very poorly. I was never mentally “in” the race and bailed at around 100km. It was the first time I ever felt like I had no interest or willingness to even fight for a finish or at least try and carry on. My body felt fine, but my head was nowhere near prepared for the task of tackling what the Spartathlon throws up.

What tip would you pass on to those taking part for the first time? Break the race down into smaller goals and try not focus too much on the cut off times and back your training and preparation.

What are you looking forward to at the Spartathlon race? The lovely warm weather and seeing my wife and newborn daughter in Sparta!

What are you not looking forward to during the Spartathlon race? The lovely warm weather.

How will you prepare specifically for the Spartathlon race? Lots of long runs on tarmac

Will you be bringing any support crew to the race? Yes, my wife and daughter (due in June).